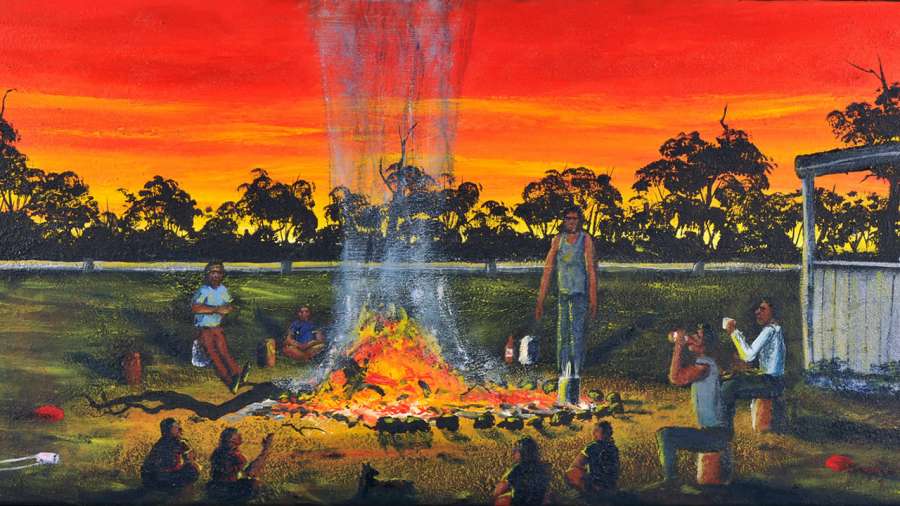 The Noongar people come from the South West corner of Western Australia. Noongar's live with in the boundaries that go as far north as Geraldton and continue through to Esperance in the south, taking in coastal plains, wet lands, lakes and rivers across a range of changing landscapes, from hills, mountainous ranges through to inland rocky outcrops.

Noongar means 'man'. They have been occupying the South West corner for over 40,000 years. During this, many communities linked by a common language with different dialects throughout the various regions. Within Noongar country there are fourteen different tribal groups, each group have a strong connection to where they come from, living off the land where there was plenty of food and fresh water.

Noongars would live off the land and lived with the land. Noongar's are to be the custodians of the land, and believe the Waagle created the land and all its waterways. The Waagle is the central figure in Noongar culture.

To Noongar people land is important. Noongar artists have been painting their land for a long time. Reynold Hart, Revel Cooper, Parnell Dempster and many others from the Carrolup Mission have been painting landscapes since the early 1940's. Noel White, who was principal at Carrolup, saw the children's drawings and was impressed. He then provided them with better materials and they produced some amazing landscape paintings which saw interest from outside of the mission. This was the birth of the Carrolup painting tradition.

The Carrolup children had their artworks exhibited in a number of regional exhibitions. While their artworks were on display in Boans in Perth, a lady named Florence Rutter saw the art works and was surprised to hear that they were painted by children, she then organised a visit to Carrolup Mission to meet the artists. From there, she took the children's artworks throughout Australia and New Zealand, Europe and the USA, where they now form part of the Colgate University Art collection.

This establishes that the children from Carrolup's artworks from the early 1940's was the first indigenous art to be exhibited, rather than what some believed had begun with the Pupunya community, which began in the early 1970's. The Pupunya artists had painted a blank wall at the school using the dot art which is where it was first used, with the dot style now being  has been sold and promoted all over the world.

Noongar artists of today are inspired by how the Carrolup artworks have achieved international attention. Noongar artists are now painting artworks that show their own struggles with issues that impact upon them. Shane Pickett, Sharyn Egan, Laurel Nannup, Athol Farmer, Graham Taylor, Philip Hansen, Peter Farmer, Sandra Hill, Chris Pease and Ben Pushman are all Noongar artists who are currently painting and developing their own art styles. Lance Chadd's depiction of a Carrolup landscape resonates with his Uncle Reynold Hart's landscape painting. Lance has also developed his own style of artworks, creating beautiful South West landscapes by using gouache on paper.

Noongar artists are now experimenting in a wide variety of media and modes of expression - ranging from paintings, prints and pottery to photography, digital work and installations. Many Noongar artists now see themselves as being squarely in the mainstream of contemporary Australian art, with artists such as Lance Chadd, Shane Pickett and Chris Pease exemplifying only some of the diverse aspects of Noongar art.

Tweet
More in this category: Indigenous Workshops »
back to top