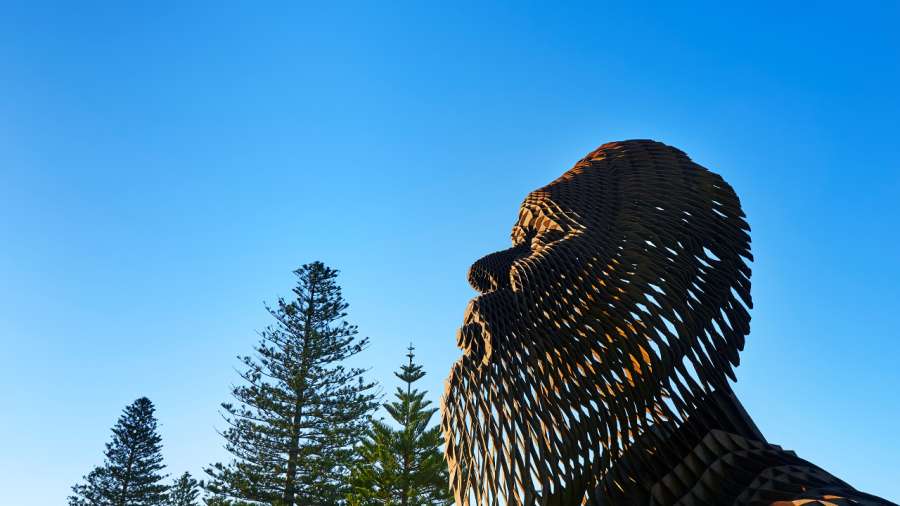 Wardandi Boodja is a five and a half metre steel bust which takes pride of place at the Koombana Foreshore. Commissioned by the City of Bunbury and funded by the State Government through Royalty for Regions, the sculpture is the work of local artists Alex and Nicole Mickle of Safehaven Studios, alongside design engineer Mike Kimble. The duo were also the creative minds behind the Bridging the Gap artwork located near the rowing club at the Leschenault Inlet as well as an installation at the Brittain Road roundabout created with Edith Cowan University students. The project was a part of the Transforming Bunbury’s Waterfront Koombana Foreshore redevelopment. Perth-based heritage interpretation company Apparatus were engaged by Cardno the principal contractors for the redevelopment to prepare an Art and Interpretation Plan. The plan included a major public artwork addressing the following criteria: A 5D landmark sculpture is proposed for the site. This stand-alone public artwork would be a prominent and identifiable feature of the Koombana Bay Foreshore. The proposed location is a highly visible place that will provide a prime vantage point to view the work for visitors as well as drive-by vehicular traffic. The City of Bunbury invited Expressions of Interest from artists for this artwork.

Once completed the artwork would improve the tourism and recreational appeal of the Koombana Bay foreshore and provide opportunities for visitors and residents to better understand the cultural history of this site. Safehaven Studios were chosen for this project following the nation-wide tender process. Their goal was to create “an artwork that speaks of place, by people from this place”. The completed sculpture represents the face of a Noongar elder, seeking to merge traditional sculpture and advanced fabrication technology to create a striking contemporary artwork that pays deep respect to the Noongar people. The Mickles consulted with various families in the region to ensure the design would recognise all the families of this region. It was decided by many of the local Noongar community that an older man would be suitable to represent a Noongar custodian. A comprehensive study of historical photographs dating from the 1870s to the early 1900s, coupled with contemporary images and faces of Noongar people enabled the artists to create an image of a Noongar elder. It is not one person, but a representation of all people. It represents the resilience and spirit of a proud Noongar man.

The title of the artwork, ‘Wardandi Boodja’, recognises one of the oldest cultures on the planet. Wardandi is a Noongar word that refers to this region’s dialectical group. This artwork stands as a guardian of this place, as a reminder we all live on and in Wardandi saltwater country. The Noongar word Boodja means country/place. Boodja is all encompassing including the whole ecosystem and human culture interwoven. In order to have an accurate representation a number of moulds were made and were then adapted to create a life-size maquette or model. This was then 3D-scanned and used as the basis for constructing the large corten steel sculpture. The completed sculpture consists of more than 5000 welds and weighs up to 4.2 tonnes. The artwork recognises one of the oldest cultures on the planet and stands as a reminder to visitors and locals alike that Noongar culture is vibrant and strong.

An important element to the sculpture is the poem displayed on the plinth which reads:

Sand and water and time move through our fingers;

damp from the sea, the land clings to us—

Slow down and listen to that whisper in the trees,

Listen to the ancestors, bworan moort, keepers of the land

singing to the silvery kwilena.

They leap and call. Hear them—

they have come to play,

Swim, koolangka, chase the seagulls, laugh in the clean air.

The earth is under our skin,

A big thank you to all of the families and individuals who have given their time freely and generously to support this significant and important new artwork.

The lighting and interpretive signage component was written in collaboration with the Noongar Community of Bunbury and writer Donna Mazza.

Tweet
More in this category: « Opportunities for Artists:
back to top